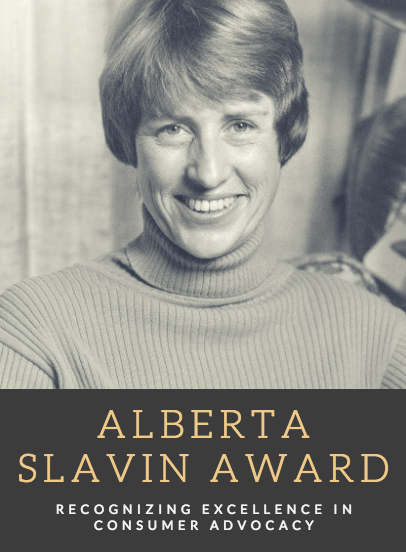 Each year, the Consumers Council of Missouri recognizes an individual who has shown a distinctive commitment to protecting the interests of consumers by honoring them with the Alberta Slavin award.

This award is named in memory of Alberta Slavin, founder of the consumers movement in Missouri whose advocacy led the creation of the Consumers Council of Missouri. Past Alberta Slavin recipients include elected officials, legal advocates, and community organizers. Both individuals and organizations may be nominated.

This year, CCMO is turning to our fellow Missourians to accept nominations for this award. The fundamental criterion for nomination is exhibiting a strong commitment to consumer rights and protections. While CCMO's work largely focuses on consumer advocacy in the areas of health care, utilities, and personal finance, nominations of individuals or organizations that have shown a dedication to consumers in other contexts are also welcome.

Nominations must include the recipient's name and contact information, as well as an explanation (one page or less) of why the individual or organization is deserving of this award. Nominations must be submitted electronically below by July 31 to be considered.

The 2018 Alberta Slavin award recipient will be presented the award during the Consumers Council of Missouri Fall fundraiser, which will be held in October 2018 (the exact date will be announced later this summer).