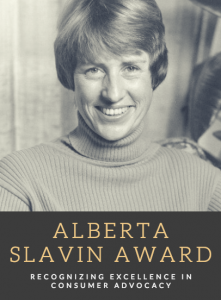 Each year, the Consumers Council of Missouri recognizes an individual who has shown a distinctive commitment to protecting the interests of consumers by honoring them with the Alberta Slavin award.

This award is named in memory of Alberta Slavin, founder of the consumers movement in Missouri whose advocacy led the creation of the Consumers Council of Missouri. Past Alberta Slavin recipients include elected officials, legal advocates, and community organizers. 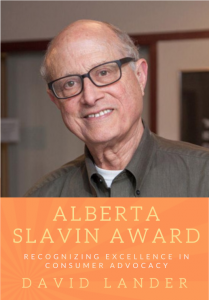 Much of David's career was spent at Legal Services of Eastern Missouri as staff council and later as the Director of the Agency.

Two decades ago, David helped found Jews United for Justice (JUJ) and more recently he has been working with the JUJ Opportunity to Thrive Committee to combat predatory lending through advocacy and by supporting responsible employer based alternatives. 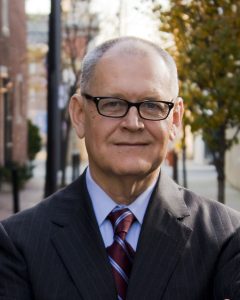 Following a 20-year career as a corporate public relations executive, Wendell left his position as VP of Communications for Cigna, one of the nation’s largest health insurers, to advocate for meaningful health care reform and to help organizations working for the greater good achieve their goals. In widely covered Congressional hearings, Wendell disclosed how insurance companies, to boost profits, engage in practices that have forced millions of Americans into the ranks of the uninsured, and use deceptive PR tactics to undermine health care reform.

His book, Deadly Spin: An Insurance Company Insider Speaks out on how Corporate PR is Killing Health Care and Deceiving Americans, is a stark warning that corporate spin is distorting our democracy. Wendell is also the author of Obamacare: What’s in it for Me? What Everyone Needs to Know about the Affordable Care Act. He is also a regular contributor for The Huffington Post and HealthInsurance.org.

Wendell’s most recent book (co-authored with Nick Penniman) is Nation on the Take: How Big Money Corrupts Our Democracy and What We Can Do about It, which exposes legalized corruption, links it to kitchen table issues Americans face every day, and provides practical solutions to restore our democracy.